Sending homemade badger insignia to the bottom of the ocean. 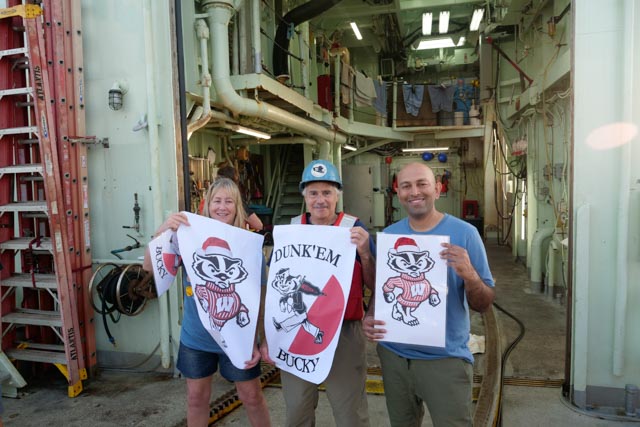 This is an accordion element with a series of buttons that open and close related content panels.

MICROBIAL ECOLOGY AND BIOGEOCHEMISTRY OF HYDROTHERMAL VENTS, OXYGEN MINIMUM ZONES, AND THE DEEP-SEA

The deep ocean is one of the planet’s largest biomes. In spite of cold temperatures and the lack of light, the deep-sea hosts abundant microbial life that play critical roles in the biogeochemical cycling of carbon, nitrogen, sulfur and other nutrients. At deep-sea hydrothermal vents, high temperature water-rock reactions catalyze the formation of chemically reduced vent fluids rich in sulfur species, hydrogen, methane, ammonia, manganese and iron. The reduced chemicals serve as electron donors to fuel chemosynthetic microbial metabolisms that form the base of the food chain in such ecosystems. In many ways, oxygen-minimum zones are similar to hydrothermal vents, characterized by a microbiome dependent on reduced chemicals especially sulfur.

We are studying the of impacts hydrothermal vents and oxygen minimum zones on the pelagic oceans through the lens of microbial ecology and biogeochemistry by conducting experiments, in situ measurements, and multi-omics.

We are a sea-going lab, actively undertaking field work with field sites around the world which allows us study marine processes are a variety of spatial scales.

Our field sites include:

ECOLOGY AND EVOLUTION OF MARINE VIRUSES

We are studying the ecology and evolution of marine viruses using hydrothermal viral communities and viruses of sulfur cycling microorganisms as model systems.

In collaboration with Dr. Bill Reznikoff from the Marine Biological Laboratory, we are studying the ecological and evolutionary constraints on subseafloor microorganisms using sulfur cycling microorganisms as model systems.